Reverend Monsignor Alan F. Detscher
203-637-3661 x324
This email address is being protected from spambots. You need JavaScript enabled to view it.

Msgr. Detscher was born in Greenwich, CT on May 13, 1945, the son of Elizabeth J. Fuhr and Francis J. Detscher, Sr. He was educated in the Greenwich Public Schools - Byram Elementary School and Greenwich High.

He was ordained a priest by Bishop Walter W. Curtis on May 15, 1971. He served as a parochial vicar at St. Patrick's Church in Bridgeport and St. Catherine of Siena Church in Riverside, where he presently is Pastor. Monsignor has held both Diocesan and National Offices including Secretary to Bishop Curtis, Diocesan Director of Liturgy, Master of Ceremonies, Secretary of the Presbyteral Council, Director of the Diocesan Office for Ecumenical and Interreligious Affairs, Associate Director and Executive Director of the Secretariat for Liturgy of the United States Conference of Catholic Bishops and member of the Consultant and Editor for Liturgy for the Diocese of St. Maron (Maronite Church).

His membership in Professional Organizations include: Member and former treasurer of the North American Academy of Liturgy (NAAL), Member and Former Chairman of the Consultation on Common Texts (CCT), and Member of the National Council of Churches Commission on Worship.

Monsignor Detscher has written many articles and books on Christian liturgy. He assisted in the preparation of the International Commission on English in the Liturgy editions of: Pastoral Care of the Sick, Rite of Christian Initiation of Adults, and Order of Christian Funerals. He authored the majority of new prayers in the American Edition of The Book of Blessings.

Reverend Mark D'Silva
203-637-3661 x318
This email address is being protected from spambots. You need JavaScript enabled to view it.

Fr. Mark D' Silva was born and raised in the Diocese of Mangalore, India, on July 22, 1953, the youngest son of Mr. Marcel D' Silva and  Mrs. Santa Ana Sequeira. He completed his primary education in Little Flower School - the Parish school and high school from a public school.

He received his pre-university education at St. Aloysius College, Mangalore, a renowned institution run by the Jesuits.

On completion of his pre-university education, he opted to become a missionary priest and joined the Diocese of Varanasi, Uttar Pradesh, India. He attended St. Charles' Seminary, Nagpur, India, and earned his Philosophy and Theology. While studying Philosophy, he also attended St. Francis de Sales College and earned his Bachelor of Arts (B. A.) degree.  He has attended Mahatma Gandhi Kashi Vidyapeeth (University), Varanasi and earned his M.A. (Master of Arts) degree in 1986.

Fr. Mark was ordained a priest by the late Bishop Patrick D' Souza on May 1, 1980 in his native Diocese, Mangalore, India.

Reverend William F. Platt
203-637-3661 x 336
This email address is being protected from spambots. You need JavaScript enabled to view it.

Ordained in 1988, Fr William Platt is a Board Certified Chaplain with the National Association of Catholic Chaplains. Presently the Diocesan Director of Hospital Chaplains and a parochial vicar at St Catherine of Siena Church, he ministered in health care settings for over 20 years. He is certified in Critical Incident Stress Management and has served as the priest/chaplain on the ethics committee of Greenwich Hospital.

Deacon Renato Berzolla
203-637-3661
This email address is being protected from spambots. You need JavaScript enabled to view it.

Renato was born in Borgotaro (Parma) Italy. He was educated at the Scientific Lyceum of the Salesian Fathers in Parma. He attended the Polytechnic Institute of Milan and he received a Bachelor of Science in Electronics Engineering from Manhattan College and a Master of Science in Electronics Engineering from New York University.

He is the President of Lux Engineering, a Consulting Firm specializing in Airport Visual Aids - Safety Systems and in High Precision Power Supplies for Physics and Research Laboratories.  He is also the Vice-President of CEI (Italian Electric Commission) - Airports Lighting Group and an Advisor to the CENELEC (Brussels).

Renato is the former CEO and President of Multi Electric Co. in Chicago and is a former Trustee of Augier Company in Carros (France).  Currently he is a Trustee of Manhattan College in Riverdale, New York.

Renato has been a parishioner of Saint Catherine since 1974. He was ordained a Deacon in 1980 by Bishop Curtis. Renato is active in several ministries here at Saint Catherine of Siena. He is involved with the Italian community and the monthly liturgy (Mass) held in the Chapel every third Sunday of the month. He and Deacon Robert Henrey meet with and prepare parents for the Baptism of their children. As part of the Siena Commission on Aging, Renato visits “home bound” parishioners in the Riverside neighborhood. He is mentor to our Altar Servers, educating and training our young men and women in the proper service of the Mass.

Every January, Renato and his wife host a “reunion” reception inviting back families that have baptized a child in the prior year so that these families have an opportunity to meet and get to know other members of our parish community.

Renato is married to Andrea Frances Mazzari for 51 years. He has 4 children and 11 grandchildren.

Deacon Vincent Heidenreich
203-257-5822
This email address is being protected from spambots. You need JavaScript enabled to view it.

Deacon Vincent J. Heidenreich was born in Pittsburgh on June 15, 1943. His father was a General Practitioner and his mother a nurse. He is the eldest of twelve, seven boys and five girls. He was educated in parochial schools, grade, high, and at The Catholic University of America.

Vince spent 35 years in the pharmaceutical industry. One of his earlier promotions to pharmaceutical marketing management prompted the relocation of his family to Greenwich in July, 1978. Since that time, he has been a parishioner at St Catherine of Siena. In 1983 he joined the healthcare division of BBDO on Madison Ave., supervising the development of prescription-drug advertising. His last eleven years in the industry were as advertising head at Bayer Pharmaceutical. He retired from Bayer in November, 2000.

Vince was ordained a Deacon for the Diocese of Bridgeport in 1990 and since then has been assigned to St. Catherine pastoral staff. He reports, "St. Catherine has well-organized liturgies that facilitate our prayerful worship and place us all in Monsignor Detscher's debt. What a wonderful group of people we have. It is a gift to be able to serve and worship with them."

As a second career, from 2001-11 Vince was Director, Religious Education at Notre Dame Parish in Easton, CT. He is now retired from that position. He continues to be very involved in marriage-preparation work for the diocese and for the parish. Vince currently is the Property Manager for St. Catherine.

Among the joys of his diaconal service, Vince identifies the privilege of presiding at the weddings of his son and daughter, the baptizing of grandchildren and his many grandnieces and grandnephews in Pittsburgh. Among his hobbies, Vince is a computer "geek" and also thoroughly enjoys playing the Hammond Organ... popular standards of the 1920s-50s.

Deacon Robert Henrey
203-637-3661
This email address is being protected from spambots. You need JavaScript enabled to view it.

Robert Henrey has served in the parish of St. Catherine of Siena since his ordination as deacon in 1984.

After retiring from a career in finance - he was a tax consulting partner with PricewaterhouseCoopers in New York City until 1997 - Robert undertook a program of clinical pastoral education, leading to certification in 2001 by the National Associate of Catholic Chaplains. At present, he is an interfaith chaplain on the staff of Greenwich Hospital. At St. Catherine's he is active in several ministries, including the parish's baptismal program, and outreach to the French-speaking and Hispanic communities. He is a member of the Siena Commission on Aging, visiting with homebound parishioners in the Old Greenwich area.

Robert is married and his wife, Lisette, is an enthusiastic member of the St. Catherine's choir. Their son Edward is a graphic artist and illustrator living in the area. Robert is French born and spends some time each year in his native country. He holds a degree in language and literature from Oxford University.

This email address is being protected from spambots. You need JavaScript enabled to view it. 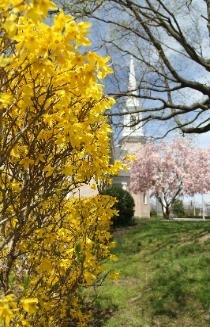 Photo Courtesy of
Hugh O'Connor
Copyright ©2017 St. Catherine of Siena, Riverside CT. | This email address is being protected from spambots. You need JavaScript enabled to view it.
Log in